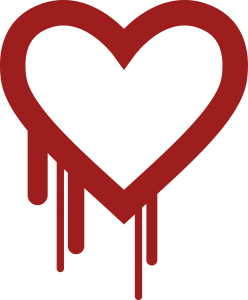 Heartbleed’s been garnering a lot of press in the past month, and with good reason: with over a half-million websites affected and tens of thousands of routers, storage servers, firewalls, video cameras, and more vulnerable to the bug, it’s one of the largest security flaws discovered in the history of the commercial Internet.

But what is Heartbleed and how can it affect your small-business?

In a short talk given to the Woodstock Chamber of Commerce SOHO Group, Mike addressed two key areas every small business should still be concerned with since the disclosure of Heartbleed:

This article contains notes and links from the presentation given on May 7, 2014.

If you have any questions, please feel free to Contact Us!

Some Facts and Tech Stuff

Before getting into how to protect yourself from Heartbleed, it’s a good idea to know a little about how what it is and how it works with a few quick facts:

One week after Heartbleed was made public, in a test of 9000 sites running WordPress, security firm WordFence announced that over 1% of those WordPress sites utilizing SSL Certificates – approximately 4100 – were still vulnerable to Heartbleed.

But it’s important to note that this number represents only a SMALL sampling of active sites! And it also only represents websites running WordPress — a single CMS.  However, there are a wide variety of Content Management Systems out there used by Small and Big business alike as well as countless sites that have been customized from the ground up, so we should assume the number of sites still vulnerable to Heartbleed remains very high.

What does this mean to you the Small Business Owner?

ESC! Technologies Group actively scans the sites of our clients who subscribe to our WordPress Maintenance Plans for vulnerabilities, and Heartbleed became one of those vulnerabilities we look for after it became public.

To ensure the integrity of your small business website, be sure to check with the developer of your site OR your hosting company to see if you’re vulnerable and what should be done about it.

In general, however, if your site utilizes the OpenSSL library, the process you’ll need to go through to ensure the security of your site is:

As an end user concerned about the security of their accounts, it can be confusing to figure out what passwords should be changed and which password don’t need to be touched.

But as you make that determination, it’s important to note that Heartbleed attacks made against a server vulnerable to the bug can NOT be detected!  So when you receive that email from a website or vendor alerting you to change your password even though the site has seen “no evidence that any user information or data has been compromised”, just know that they wouldn’t have seen any evidence!

Of the Top 100 sites (according to Alexa) tested in the week after Heartbleed was made public, 34 of them were listed as having had the vulnerability, but since patched. 40 were listed as not vulnerable, and the rest had yet to be determined.

Some of the vulnerable sites included:

So what can you do to protect yourself?

It comes down to 3 simple steps:

If a site was affected and patched, change your password.

If a site uses SSL/TLS to encrypt your communications, but you’ve not heard one way or another if they’ve been affected OR if they patched the vulnerability, DON’T log on to their site!

This is especially important when visiting Small Business sites or sites you’ve previously not done business with.

Verify the site hasn’t been affected using one of the tools listed below or wait for the patch to be applied and then change your password.

Two tools ESC! Technologies Group recommends for storing your passwords, 1Password and LastPass, can now actively check your saved sites for vulnerabilities, so if you’ve not yet upgraded to the latest releases of these excellent tools, you should do so today.

This last step bears repeating: Don’t use the same password on more than one site!

If you used the same password across multiple sites, you’ll want to change passwords on both sites formerly vulnerable as well as those that weren’t.

Tools you can use to check if a website is vulnerable include:

Qualys SSL Labs has an SSL Server Test at

Check for Hardware Vulnerabilities Too!

Specific examples found to be vulnerable include:

The good news is that many of those devices are behind home and business routers and firewalls, but even still, some that reach out to the Internet to allow remote access – like the HP printers and the My Cloud — will need to be patched as soon as an update is available.

Also good is that many devices utilizing OpenSSL use an older version of the toolkit that’s not vulnerable to the Heartbleed bug.

SO if you have Internet connected devices OR you use a router to connect your office to the Internet (you do), check with the manufacturers:

1) To Find Out if your device vulnerable
2) If a Patch – or a workaround — is available yet, and
3) Apply that patch as soon as possible.

Sources Used to Prepare the Presentation: